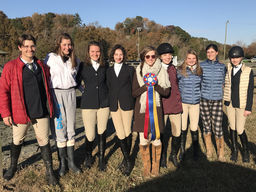 Greenville, S.C.- The Spartanburg Day School Equestrian team were back in action over the weekend as they competed at the Riverbed Invitational in Greenville.

In the Junior Varsity Beginner flat competition Lara Mallen was fourth while Virginia Thomas had a fifth place finish in the Future Novice over the fences.

Overall it was a good outing for the Equestrian with all the riders gaining valuable experience in competition.

The team will be back in action in the Regional competition on February 5th which will be staged at Harmon Field.

Read More about Equestrian team has solid weekend at event